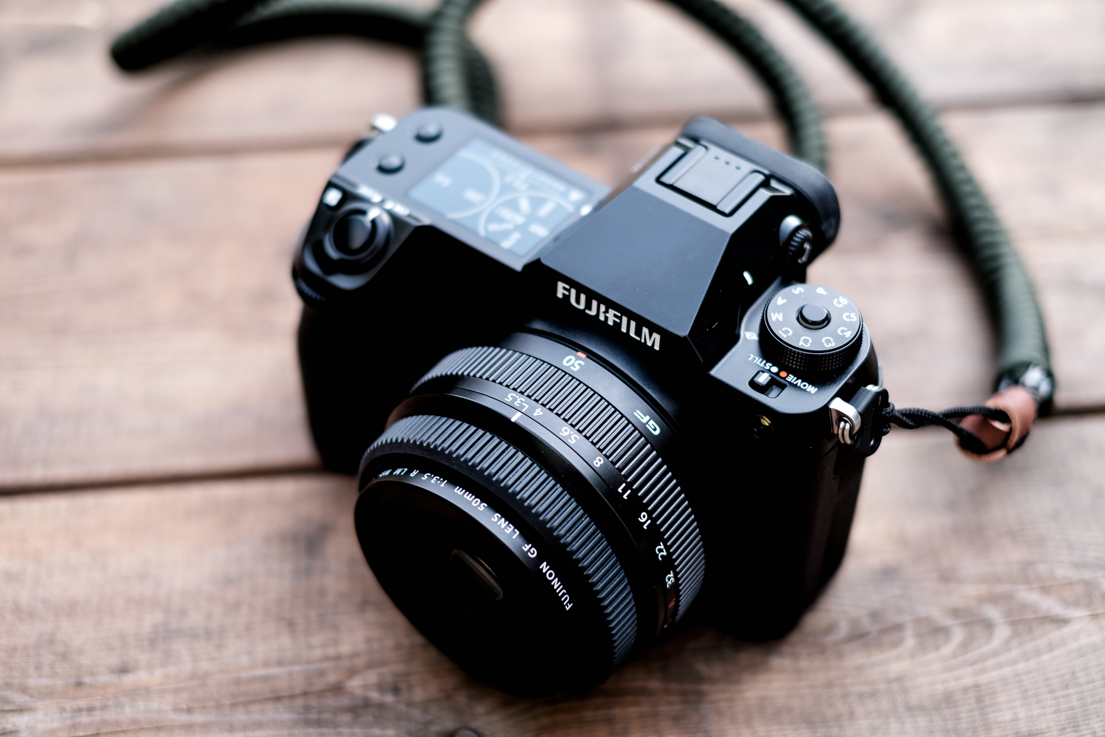 I have often expressed my strong preference for (fast) primes, especially for wide-angle lenses. Now a lens comes along that does not meet this preference at all. The GF50mm is neither fast nor particularly wide-angle. It’s more in the tradition of some 40mm lenses becoming somewhat popular in the 70s, like the Summicron-C 40mm F2 for the Leica CL. Personally, I have always felt this focal length of 40mm equivalent to be at least a little bit strange – somehow neither fish nor fowl. For this reason and because of the missing aperture ring I have never been interested in the XF27mm F2.8 (MK I) of the X-System – despite its small size.

However, I have a second preference for many pragmatic reasons: I really like small and lightweight lenses. This was not a good enough reason for me to buy the old XF27mm in the X system, as there are plenty of alternatives in this size category – especially the often unjustly underrated XF18mm F2 or the two “Fujicrons“, the XF23mm F2 and the XF35mm F2 (German only). In the GFX system, on the other hand, the world looks quite different.

The GF50mm is a very special lens, not because it is exceptionally good optically, nor because it has particularly exotic characteristics in terms of speed or focal length. It is optically good, but nothing that special and the speed and focal length are truly very ordinary. Its special features are its small size and light weight. No manufacturer of medium format cameras has yet come up with the idea of developing a kind of pancake lens for their system. It seems a contradiction in a world where the best is always just good enough, where there is no compromise on quality. Fujifilm has had the courage to go down this path – and in doing so they have created a unique lens.

Spoiler: It can be very worthwhile to make compromises sometimes when they are so small and offer so many other qualities, as in this case.

Actually, I could save this section on reviews of GF lenses – they are all sensationally well built and crafted. The GF50mm is no exception in this respect. So, I try to at least briefly mention any special features, if there are any.

What is there to say about the GF50mm in terms of mechanical characteristics that would not apply to all GF lenses? Actually nothing so far from my point of view, which is good news. The smallest and cheapest GF lens is in no way inferior to the others here. I do wish, however, that the aperture blades would “chatter” a bit quieter.

I would, though, have one comment about this very special lens hood. At first, I didn’t know whether to like it or just find it funny. And I was a bit surprised that this thing is screw-in and doesn’t have a bayonet – since screwing is annoying. But on the other hand, Fujifilm has made this very smart. The lens hood is made of metal and thus offers super good protection for the front lens. And Fujifilm also supplies two lens caps – one for with and one for without the hood. So, you don’t always have to screw it on and off. Now, I think it’ s super cool after all…

No, it’s not the outstanding GF45mm F2.8 – which I consider one of the best lenses ever. Nor does it have the magic of the XF35mm F1.4 – which some claim not to see anyway (I do it though). To be quite honest, it also doesn’t come close to the optical performance of the GF32-64mm F4 – although that says more about the exceptional position of the zoom. But it is good. It’s really good!

Apart from the fact that sometimes a little less perfection would do us a world of good, it’s worth bearing in mind that this is still a modern medium-format lens. It is optically so much better than most lenses with which the great masters have photographed over the last 100 years. And it is optically much better than the earlier mentioned XF18mm F2 – which I nevertheless regard as one of the most useful lenses in the X system.

However, I have to give a small minus point for the poor closest focusing distance of 55 cm – probably a compromise of its pancake design. The sharpness in this close-up range is also not outstanding at maximum aperture – although I’m complaining at a very high level here. This small weakness can only be noticed in the 100% view of the 100-megapixel sensor of a GFX100(S). Personally, the not so great closest focusing distance hurts me more.

So what can I say in summary? None of its optical qualities are particularly outstanding – neither the sharpness nor the bokeh. But both are nevertheless on such a high level that this is irrelevant for me, especially for the typical applications of such a lens – reportage, documentation and everyday use. I wouldn’t think for a second whether the image quality of the GF50 is sufficient – it is in any case!

We are dealing here with the fastest AF of all GF lenses – and that by far for some lenses – which is also very reliable and whisper quiet. The combination of a linear motor and little glass to shift show their full effect here. I can’t see any difference here between the GF50mm and some of the fastest focusing lenses within the X system. That’s incredible for a medium format lens! Working with the GF50’s autofocus is a real pleasure in almost every situation.

There are maybe minimal drawbacks in really very low light conditions – which is simply due to the maximum aperture of 1:3.5. The also very fast focusing GF32-64mm with its maximum aperture of F4 shows this slight weakness here as well, which cannot be prevented. Now this is complaining at a very high level, but you should not expect the performance of an F1.4 lens on a Fujifilm X-T4 in really low light – that simply cannot work physically.

At this point, a word about the slight buzzing noises that come out of the lens during vertical movements. These are obviously noises from the linear motor that keeps the focus block stable or something. I also heard it with the GF32-64mm, but more discreetly (perhaps because of its mass and size). The noises are not loud or particularly disturbing, but at first, I was a bit irritated. After a while I forgot about them and no longer notice them consciously…

Probably this is the biggest strength of this lens – at least for me personally. The size and weight are so outstanding (low) for a medium format lens that it simply allows me to have a truly portable combination in my hand – at least together with the also comparatively small GFX100S. This unique selling point together with the blazing-fast AF make this lens an absolute winner for me.

This GF50mm allows me to use my medium format camera beyond the “special situations” I usually describe. Unlike with a GFX50S and the GF45mm, I would also take it out on the street and just walk around. I might even take this combination on a smaller trip here and there – something that was previously unthinkable for me with the GFX system.

A few more thoughts about this focal length

I have to admit that I am starting to fall in love with this focal length. On the one hand, this is because the perspective distortion typical for wide-angle lenses is missing. On the other hand, the images are also not as compressed as with longer focal lengths and there is still enough “wide-angle feel” left for environmental portraits.

However, there’s a bit of a catch to this that I’ll have to think about in more detail. Just this much in advance: I am firmly convinced that I will become a better photographer if I concentrate on one or only a few focal lengths. I feel that I’ve expanded my preferences too often in recent years – and at the moment I jump back and forth between 24, 28, 35 and 50mm (always meaning the equivalent). Now the next focal length… I don’t think that’s really doing me any good.

As I said, I’ll think about it in more detail and write a separate post about it on occasion. Maybe with a beer standing next to my laptop 😉

The GF50mm definitely belongs in every kit of a GFX user who wants to do documentary and street photography also with medium format. But don’t underestimate this lens otherwise either – calling it a pancake somewhat belittles the fact that it is a modern high-quality lens that can (stopped down a little bit) easily match the resolution of a 100 megapixel camera. Real compromises usually look different…

Highly recommended! (Only recommended for real nit-pickers, but exceptional in terms of its real-world usability)

There is always light somewhere – go out and shoot!